ESTELLE SINKINS reviews The Echo of Noise at the Elizabeth Sneddon Theatre in Durban.

WEARING a black sweatshirt with the legend ‘Almost Famous’, Pieter-Dirk Uys makes a quiet entrance on stage. Then, sitting on a stool in a pool of light, he begins to speak. The story he weaves in The Echo of Noise is funny, sad, poignant and utterly compelling.

His relationship with his father drives most of the narrative, with the opening seconds a recording of a young Uys singing, accompanied by his father, Hannes.

As a child he would travel around with his parents performing at weddings and on the radio for pocket money. He was always dressed in a kortbroek (short pants) because he says, Hannes was concerned that if he wore longs his voice would break!

As an Afrikaans family, church services were never an optional extra. And impressed by the classy cars they drove and the dominee’s apparent cast iron entry into heaven, Uys contemplated life as a pastor – or a steam train driver. The mind boggles at the thought of the country’s best known satirist doing either job.

Growing up Uys and his father struggled to find anything in common. Hannes was a strict disciplinarian, whose word was law; but also passionate musician, and the life and soul of a party. Who was the real man? It took Uys a lifetime to truly find out.

Uys’ German-born mother, Helga, a talented pianist, was a loving and supportive presence, even giving him a return ticket to Europe when he finished school. And when he chose to be an actor, it was Helga who encouraged him to pursue his dream, despite opposition from Hannes. 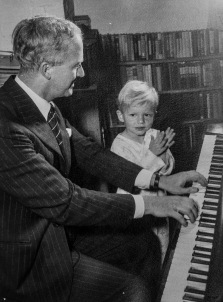 He would later discover that she was a Jewess and that she had been forced to flee the Nazis, with just her memories and a beloved piano, in the years leading up to the Second World War.

Sadly, his mother reached a point where she could no longer cope with the world and took her life at a viewing point on Chapman’s Peak. Decades later Uys continues to miss her presence in his life.

Listening to Uys share stories of his parents in The Echo of Noise, you get a sense that both had some slightly subversive tendencies. In Germany, Helga continued to perform as a pianist in spite of being banned by the Nazis from doing so, and Hannes – angered by the stupidity of the censors – told his son to make them look ‘belaglik’ (ridiculous).

The Publications Control Board, for whom Hannes worked, was the best public relations team Uys ever had. And he admits that in his days at the Space Theatre, and later at the Market Theatre, he went out of his way to tweak the National Party’s tail.

He was delighted to learn that one women at the censor board had the task of writing out every swear word he had used in a banned production – even writing a note to him once to point out that he had felt one of the words wrong. Uys and his friends had these letters framed and hung in the loos at the Space Theatre.

The Market was where he started doing his satirical impersonations of those in power. These now legendary sketches made the subjects look ridiculous and revealed the rank stupidity of the apartheid system and its rules.

Uys’ alter ego, Evita Bezuidenhout, also appeared at this point and today has a life practically independent from that of the man who created her. Word has it that the Tannie might be throwing her hat into the ANC leadership ring!

Another key person in Uys life was Sannie, the family domestic, who was a staunch ally when he was a child. She taught him the ‘real Afrikaans… the language of the Cape Flats, which makes the angels laugh’ and together they would listen to her ‘stories’ on Springbok Radio.

More importantly it was Sannie who stepped in to help care for Hannes in his final weeks and who remained a staunch supporter of ‘her other son’ until her death.

Echo of Noise is, I believe, Uys’ finest work. He has dispensed with props and costumes and given us the chance to learn a little about himself, his life away from the stage and even his life-long love for Sophia Loren.

If, as he says life in the theatre has been, a life-time sentence, without hope of parole – then we have been blessed that Uys has allowed us to share it with him.

The Echo of Noise is at the Elizabeth Sneddon Theatre at the University of KwaZulu-Natal Howard College campus until August 6. Tickets at Computicket.