Review: The Play That Goes Wrong at the Elizabeth Sneddon Theatre, UKZN Durban

“THIS set is a f***ing death trap!” – Never have truer words been spoken by Trevor, the stage technician, played by Adam Dore, in KickStArt’s hilarious production ofThe Play that Goes Wrong.

The set, loaned to the award-winning Durban theatre company by Pieter Torien, is a full-blown character in this play about the Berea Amateur Dramatic Society’s (BADS) attempts to stage the 1920’s whodunnit, The Murder at Haversham Manor.

As the name suggests, everything that can possibly go wrong does, from actors forgetting their lines to the set slowly disintegrating around them.

I can’t begin to imagine the number of cuts and bruises the cast accumulated during rehearsals, but if the number of ‘catastrophes’ on press night is any indication they may all end up in hospital by the end of the run!

The play opens with stage manager, Annie (Daisy Spencer), frantically trying to fix a mantlepiece on the set, even roping in a member of the audience to help.

The aforementioned Trevor, meanwhile, is distracted from his tech duties because he’s misplaced his Duran Duran collection. He even wanders into the stalls to ask patrons if it might just be lurking under a chair.

Despite these minor issues, things start off pretty well for our amateurs. 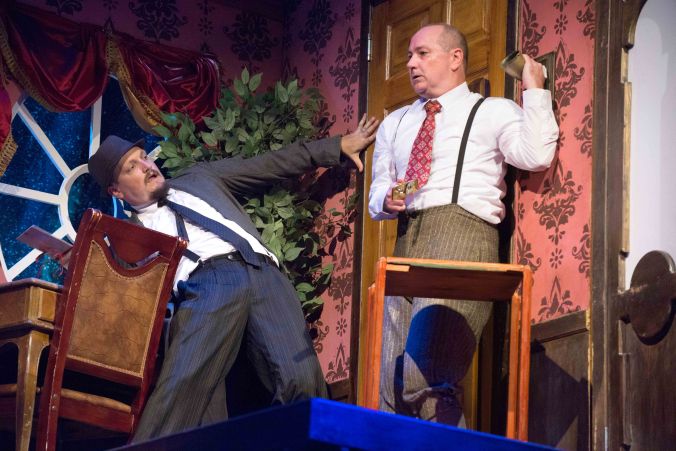 But mayhem soon ensues when doors refuse the open, a lift to the ‘second floor’ collapses, a revolving bookcase decides to have a mind of its own and a variety of much-needed props disappear.

The cast in whom director, Steven Stead, has entrusted this on-stage chaos, delivers the goods with pinpoint timing from the moment Michael Gritten’s character, Max, takes up his pose as a corpse on the chaise longue.

He plays the role of Cecil Haversham, who is found murdered on the night of his engagement to Florence Collymoore, but his fellow thespians still manage to stomp all over his hand and then drop him to the floor when their stretcher fails.

Gritten’s efforts to leave the stage unobserved following this disaster are comedy gold.

James Cuningham is on great form as Robert, the actor who is playing Cecil’s best friend, Thomas Collymoore.

In one scene he’s forced to try and save himself and the furniture in the ‘second floor’ study when the set begins to break.

Balanced precariously a few metres above the stage, he somehow manages to hold on to a desk, table, plants and props. Dangerously funny…

Iain Robinson plays the BADS’ director, who gets more and more worked up as the madness intensifies, while Liesl Coppin, who plays leading lady, Sandra aka Florence, spends much of the play being knocked out by bits of scenery and dragged in and out of doors and windows.

Spencer’s unwilling Annie was a personal favourite. When her character is forced to step in for Coppin and play the role of Florence, her delivery of the dramatic prose is deliciously deadpan. She also does some moves which could make her a permanent fixture on WWE.

Bryan Hiles, having just spent weeks playing the title role in Shakespeare’s Hamlet, clearly has a lot of fun playing Jonathan, a character who is clearly not used to the spotlight; while Mthokozisi Zulu had me in stitches as the very doddery butler, Perkins.

Byan Hiles and Iain Robinson – with James Cunningham, Liesl Coppin and Michael Gritten in the background.

It takes a huge amount of talent for good actors to play very bad ones, and when you add in the amount of physical theatre involved in this show, it’s not surprising that the cast got a standing ovation at the end.

The Play that Goes Wrong is a fairly new production, but has won every major award since premiering in London in 2012. Having seen KickStArt’s version, I’m not the least bit surprised.

It is one of the most entertaining night’s out I’ve had in a long-time. A must-see.

The Play that Goes Wrong is at the Elizabeth Sneddon Theatre at the University of KwaZulu-Natal’s Howard College campus in Durban until April 29. Showtimes are 7.30 pm nightly, Tuesday to Saturday, and 2.30 pm on Saturday, and 4 pm on Sunday. Tickets start at R180 and booking is through Computicket.