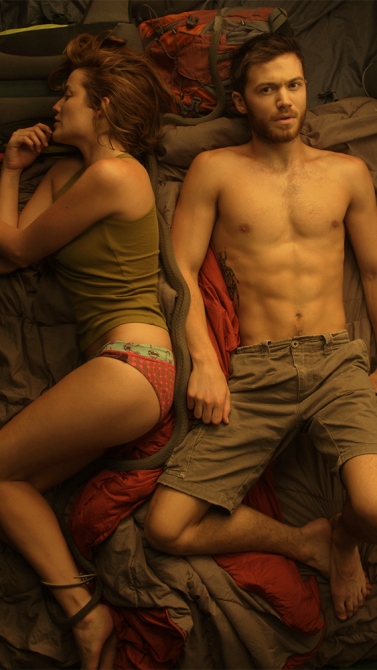 There are only three characters on screen and it’s the sleek snake of the title which ends up outshining the humans for most of the 80-or so minutes.

The Enigma Pictures and Distant Horizon/Videovision Entertainment production tells a fairly simple tale: a couple – played by Sarah Dumont (Scouts Guide to the Zombie Apocalypse, Don Jon) and Tom Ainsley (from the television shows Versailles and The Royals) – head into the wilderness outside Cape Town, set up camp next to an idyllic waterfall, and then have a nasty encounter with a deadly Black Mamba.

It opens with Dumont’s sexy businesswoman, Gwynneth, seemingly being stalked by a man she is having an affair with. With her phone pinging with messages, she’s desperate to keep her infidelity a secret from hubbie, Adam.

He, it turns out, is a conservationist, who has just received a grant to travel to the remote Suicide Gorge where he hopes to discover a new species of beetle.

The trip seems like the perfect chance for Gwynneth to get away from her lover and she begs Adam to take her with him. He’s surprised but happy, even if it means kicking his fellow scientist, Pete, into touch to make it happen.

After a two hour hike the couple find themselves a spot of paradise. She swims in crystal water, while he carves her a token of his devotion from some handy wood. Cue a love scene. All is rosy in this new Eden.

Unfortunately, Gwynneth cannot resist the temptation of checking her phone – a fairly obvious nod to Eve and a certain tempting apple – and in doing so she opens the door to their deadly visitor.

When Adam realises Africa’s most aggressive snake is slithering around them, he is prepared to do anything to save his wife… until he stumbles across those all too revealing texts on Gwynneth’s phone.

The claustrophobic setting of the tiny tent is maximised by cinematographer, Jacques Koudstaal; while Andy Schar’s score helps ratchet up by the tension.

So far, so good. Why then, when you have managed to come up with a decent ‘will-they-or-won’t-they-live’ scary movie, do you want to muddy the waters?

In making Serpent, Evans tries to turn a fairly standard horror into an arty meditation on fidelity and marriage in the 21st century world of social media. It doesn’t work.

If you are going to do an arty horror, you need to create compelling characters. Adam and Gwynneth’s characters are anything but. They have no depth, no light and shade.  And, because we never get a window into their relationship, it makes it for us hard to understand what has brought them to this critical juncture – and, ultimately, to care what happens to them.

DID YOU KNOW? Serpent, which was selected for the Berlinale Co-Production Market in 2012, had its world premiere during the Nightfall portion of the Los Angeles Film Festival on June 17, and was screened in the Cannes Market, part of the Cannes Film Festival.