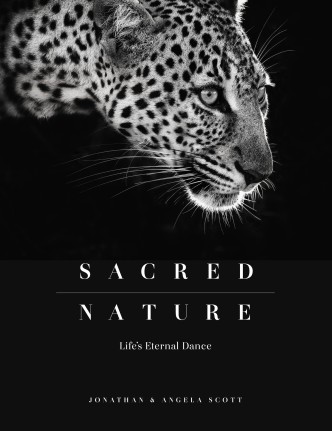 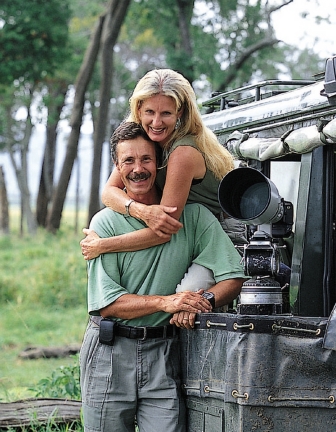 ESTELLE SINKINS talks to Jonathan Scott about the stunning book, Sacred Nature: Life’s Eternal Dance, which he and his wife, Angela, have released.

The Kenyan-based couple are internationally renowned conservationists who were inspired to create this book by Angela’s love of photography and the work of philosopher Joseph Campbell. The result is a poignant testament to our vanishing wilderness.

Jonathan and Angela have spent much of their adult lives working in the wildlife haven that straddles the Kenya-Tanzania border and is known as the Mara-Serengeti. This ‘land of endless space’ is home to myriad wild creatures, reminding us of the time when man roamed savannah Africa in search of food and shelter alongside the great beasts.

Together they have documented the lives of lions, leopards and cheetahs, recording every aspect of the big cats’ character and existence in drawings, photographs and television programmes, including the BBC’s Big Cat Diary.

Anyone who loved this wildlife series as much as I did will remember the moment that Jonathan got ‘scent marked’ by the cheetah, Kike, who has taken a fancy to his Land Cruiser and would use it get a good look at the endless miles of savannah around her.

“Cheetahs are known for climbing up on termite mounds to take a look round. They also like to leave a strong scent by spraying urine and defecating on. What I didn’t want was for all that to come down on me!,” says Jonathan, who, with Angie, is a Canon Ambassador. “Even now, when I’m travelling – in London or at Machu Piccu in Peru – you see people get this look of recognition when they see you. You can see them thinking ‘that’s the guy the cheetah poohed on’”

Big Cat Diary was a massive television success, running from 1996 to 2008. In the series, three teams of specialists filed weekly reports on the family life of cheetahs, lions and in the heart of Masai Mara National Reserve in Kenya.

Other popular regulars in the series were the lions of the Marsh Pride, and Jonathan admits that it was devastating to learn that eight of the big cats had been poisoned, allegedly by cattle farmers who had left a poisoned carcass for them to find. Three of the lions, including the pride granny, Bibi, died.

Jonathan and Angie had followed the lions since 1977 and the pride, who lived near the Musiara Marsh, became stars of the series and their book The Marsh Lions (1982, updated 2012) co-authored with Brian Jackman. Bibi had been a fixture in their lives since 1998 when she survived a buffalo attack as a cub.

“She died a miserable death, an agonising death,” Jonathan said. “It was like losing a friend. She was a lovely lioness, very mellow and someone that the whole pride got on with.”

Sadly, Bibi wasn’t the first lion to be killed in the Mara, and probably won’t be the last.

“There is nothing shocking anymore as to what is happening in the Masai Mara,” says Jonathan. “In the past, when the Masai were nomadic, humans and lions lived reasonably well together, but now thousands of cattle encroach in to the reserve every night when visitors are safely out of sight – but when the likelihood of conflict with predators such as lions and hyenas is at its greatest. This makes no sense.”

With their territory diminishing the big cats view cattle as a prey source. Conflict is inevitable and usually tragic for lions.

Jonathan believes better management of the reserve is needed, and that the Kenyan government needs to make the environment an important issue – as important as health and education. But he accepts that this cannot happen overnight.

“The only way to prevent conflicts between farmers and animals is to give people enough incentive,’ he says. “We need to persuade the herdsmen that lions equate to tourists – and that means a financial return.

“Tourism generates a lot of income in Africa and it makes it sustainable to keep wild spaces for all of us. To do this we need the support of the international community. Africa cannot do this alone.

“We are squeezing the last of our wild animals off the planet. We are gobbling up the earth. I don’t know about you, but I don’t want to live in a world without elephant, without lions. We need to protect these charismatic, iconic animals because when we do we also protect their habitat and every leaf, insect, bird in that area. We need that wonderful diversity of life.”

Jonathan Scott was a presenter in the BBC’s Big Cat Diary. Photo: BBC

The Marsh Pride were at the heart of the Big Cat Diary series – along with the leopards Half-Tail, Zawadi (Shadow) and Bella and the cheetahs Queen (Amber), Kike, Honey, Toto and Honey’s Boys – and it continues to live on thanks to episodes which can be downloaded or bought in DVD form.

Jonathan, however, hopes it might be revived as a series in the next year.

“We would love to pick up on the stories of all the big cats that we followed in Big Cat Diary and all those we are following now,” Jonathan said.

In the meantime, he and Angie, are sharing images of the cats and other animals in their coffee table book, Sacred Nature.

“The book is very special to us because it is a visual record of the history we share,” Jonathan said. “It is also a tribute to Angie’s vision of forcing us to look at nature in a more spiritual way. For Angie each tree and flower is a work of art, each leaf something to marvel at.”

Producing Sacred Nature was a family affair, with the book designed by their son, David, a graphic designer in America.

“I think it takes the wildlife picture book to a whole new level, a spiritual level, but putting it together was agony because David insisted on using photos we would not have chosen ourselves,” Jonathan said. “He didn’t want to use any of our favourite pictures. It was the equivalent of an editor ‘murdering your darlings’ in a text. But, in the end, he was right. He has managed to include a lot of photos which definitely have something to say.”

British-born Jonathan, who has lived in Africa since travelling across the continent in the seventies, has always used images as a way to record animal behaviour, but for Angie it’s something deeper. Born in in Alexandria in Egypt, she has been taking pictures since she was a child growing up in Daar-e-Salaam. He father created a dark room for her and she soon set about recording the fauna and flora of East Africa.

Sacred Nature showcases her talent beautifully in both colour and black and white. Some of the images have the feel of ink on paper, such is their crispness. Every wrinkle, eyelash and whisker on an elephant, lion, cheetah or leopard is exquisite.

I also found the portraits of the Masai people extremely striking, while the various colour photos of Africa’s seemingly endless plains touching the horizon are breathtaking.

The photos are accompanied by a short text about elephant, lion, cheetah, leopard, the great annual migration of wildebeest, antelope and zebra, the problem of Africa’s shrinking wild spaces and the life giving properties of rain.

There are also quotes from poets, philosophers and writers, as well as the words of Ted Perry, who was inspired by a deeply moving speech by Chief Seattle from the Sioux tribe which talks about why every part of the earth is sacred to his people.

Only one person’s words are missing. The couple were forced to remove a quote from the Buddhist leader, the Dalai Lama, because the book was being printed in China. “Angie was not happy because she loves Buddhism,” said Jonathan.

Despite this, the book, still perfectly encapsulates their personal philosophy and their role as photographers to speak out on behalf of Africa’s – and the world’s – wild creatures.

“I remember that my first job was working on a houseboat in the Okavango. I was showing tourists around. I woke up early in the morning and heard the hippos grunting and the cry of the Fish Eagle. Forty years later I am still thrilled by Africa. I am so happy that I can share that with people in this book,” says Jonathan.

Jonathan and Angela Scott are the only couple to have won the overall award in the prestigious Wildlife Photographer of the Year Competition as individuals.

They have also written and illustrated 30 books, including best-selling safari guides to East African animals and birds, and acclaimed children’s titles for the Collins Big Cat series.

Jonathan and Angela were married in the Mara in 1992. The couple divide their time between their home in the leafy Nairobi suburb of Langata, overlooking the beautiful Ngong Hills, and a stone cottage in Marsh Pride territory at Governor’s Camp in the Mara.

As well as East Africa, they love to explore the dramatic landscape of Namibia.

Jonathan and Angela are patrons and ambassadors for a number of conservation organisations including the Cheetah Conservation Fund in Namibia, the Kenya Wildlife Trust’s Mara Cheetah Project, the Colobus Organisation, Galapagos Conservation Trust and the Bishop Simeon Trust.

In this book he reveals the fascinating – sometimes painful – story of his journey of becoming one of the world’s most respected wildlife presenters, writers and photographers. He published the book concurrently with Sacred Nature.

Beautifully illustrated with drawings and photographs by Jonathan and his wife Angie – herself an acclaimed wildlife photographer – this autobiography is both gripping and thought-provoking one.

It also raises uncomfortable questions about the future of wildlife on a continent where the needs of the people sometimes can seem overwhelming.

Scott has published the book concurrently with Sacred Nature.

From a childhood spent on the family farm in Berkshire to travelling 6,000 miles overland in Africa and starting a career as a wildlife artist and safari guide, his tale is that of a life-long love affair with the natural world. And a fervent desire to see it nurtured and preserved.