Governor Arthur Phillip, played by David Wenham, in a scene from Banished. All photos: BBC

NEW to BBC First (DStv channel 19) at 8 pm  on Wednesday, April 27 is the historical drama, Banished, which tells the tale of Britons – orphans, petty thieves, prostitutes and highwaymen – who, in 1787, were banished to Sydney in Australia. TheLuvvie spoke to  David Wenham (300, Lord of the Rings) regarding a new series in which he plays Governor Arthur Phillip.

Why did you want to play Governor Phillip?
This is a terrific project to be involved in. I’m Australian and from this side of the world where Arthur Phillip is held in very high esteem, an amazing man who had a huge impact on this country and its future.

How would you characterise Phillip?
I’d describe Philip as a modern man. I think he was way ahead of his time in lots of ways. His thinking was very egalitarian. He wanted to start a society here that was based on a form of equality. His thinking about the indigenous population was also way ahead of its time – and in fact way ahead of a lot of people’s thinking even now. He was somebody with great vision, with great foresight, and he was somebody who was also a compassionate man. I see him as a visionary.

What is his story as told in Banished?
Banished is a sweeping ensemble piece and at the core of the cast are the emotional threads between Tommy, James and Elizabeth. I think that Phillip’s role in this particular series is as the man who has to cope with the moral dilemmas of the piece. He has to decide in this new, frontier land whether the rules of England actually do work or whether it’s better for him to change some of those rules to start a society with laws that are a little bit more flexible. For the greater good and the bigger picture he sometimes has to make some pretty heavy sacrifices and big decisions. They’re never simply questions of moral absolutes – it’s never black and white – and the matters they are dealing with are not little things: they are people’s lives.

What did you know of Governor Phillip and this period of history beforehand?
In this part of the world everybody is taught about this period of history when we go to school. However, the way that it’s taught to us is – well, back in my day anyhow – sort of by rote learning. It was never taught in a captivating or interesting way. So my recollection of it was not terribly good. However, after having read the script and then embarking on rather a lot of reading myself – I think I’m up to fifth book on Phillip at the moment and now realise it’s an incredible part of our history, much more visceral and exciting and brutal and dramatic than I could ever have imagined.
The thing that struck me more than anything, particularly with Phillip, was that they seemed to have been able to squeeze lifetimes into their short years back then. By the time he’d reached Australia he had already been around the world a number of times. He’d worked in South America, he’d been a spy in France for up to a year; he worked on a whaling boat when he was nine in Scandinavia… extraordinary stuff. I only can but admire what he did.

What is his relationship with Major Ross?
I suppose in a way Ross is Phillip’s nemesis. He was a real-life character here, who quite possibly could have got the soldiers to rebel against Phillip’s governorship. Phillip was certainly very well aware of that, and so in order to keep Ross and the soldiers on side he had to walk a very fine line and make some very tricky calls.

What have you made of Jimmy McGovern’s scripts?
There’s one particular sequence that’s very difficult to talk about without actually giving it away but it was something that I’ve never actually come across before. There are maybe 14 or 15 characters in this ensemble and in that one particular sequence Jimmy McGovern seamlessly brings together all the storylines and all the characters without you being aware of him actually doing it. It’s only retrospectively that you think, ‘Oh my God, he’s actually got that character doing that at that time, and that character doing that, completely seamlessly.’ It’s a remarkable achievement.

What else about Jimmy’s writing?
He has the ability to be able to create characters very colourfully, very clearly and succinctly, without fluff, without stuff that’s extraneous – he goes straight for the meat of the characters. And especially with a story like this, which is so inherently dramatic, for him to be able to effortlessly draw those characters is brilliant.

How was it to film much of this story in Sydney, where it actually took place?
Well for me it’s wonderful because I live here. I haven’t filmed in Sydney I don’t think for about five years, so it’s a great joy for me to be able to wrap at night and be able to go home to my family. But living here has also given me lots to think about with regard to this story we’re telling. I went to the Mitchell Library here and the Art Gallery of New South Wales, which has some wonderful paintings of Sydney Cove 20 years after settlement. It’s remarkable, just geographically how similar Manly Cove, where we have built and filmed the camp, looks to Sydney Cove back then – art department, locations, and production design have done a remarkable job. But most of all you look at those paintings that were painted only 20 years after our story and already you see the development that occurred thanks to convict labour, and a lot of them were unskilled. What they achieved within that time period was phenomenal, absolutely phenomenal.

David Wenham is known in Hollywood for his roles as Faramir in The Lord of the Rings film trilogy, Carl in Van Helsing, Dilios in 300 and its sequel 300: Rise of an Empire and Neil Fletcher in Australia. 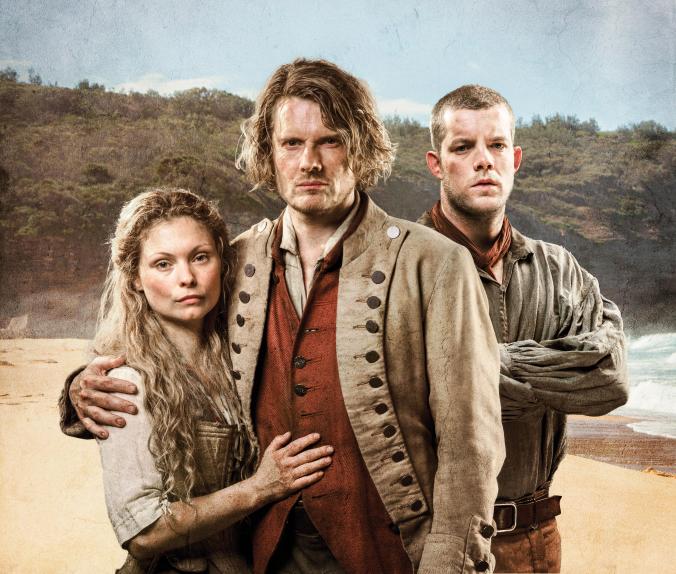 WHAT IS BANISHED ABOUT?

IN 1787 Britain banished its unwanted citizens – orphans, petty thieves, prostitutes and highwaymen – to Sydney in Australia.

It was so hot, barren and hostile that very few people had ever set foot there. Yet these rejects, overseen by a small number of British officers and marines were expected to establish a colony.  Somehow, in spite of famine, drought, escapes, hangings and floggings, the colony thrived…

Elizabeth and Tommy are also engaged in an illicit relationship – illicit because it is a tenet of this combustible society, that relationships between the convicts are banned and that the women convicts are the sole preserve of the male soldiers.

When their relationship is revealed to those in charge, it sets in motion a series of events that forces the pragmatic and idealist Governor Phillip (David Wenham), into further opposition with his nemesis Major Ross, a man who thinks the only chance of survival is to rule with an iron fist.

But it also threatens the close bond between Elizabeth, Tommy and James at a time, and in a place, where survival depends on having the back of those you love.

Also featuring in this epic series about human courage and endeavour, love, loss and impossible choices are Ewen Bremner as the pious Reverend Johnson, with Genevieve O’Reilly as his selfless wife and Brooke Harman as Deborah, Governor Phillip’s housekeeper. Rory McCann (Game of Thrones) is the formidable felon, Marston.

Banished is a compulsively watchable character-led drama with an all-star cast and is written by one of TV’s greatest screenwriters, Jimmy McGovern (The Street, Cracker).