Jemma Kahn and David Viviers in a scene from Cellist With Rabies. Photo: Harry Lock

THIS year’s Hilton Arts Festival has given festival-goers in the KZN Midlands the chance to experience everyone from belly-aching stand-up comedy to thought-provoking drama. Estelle Sinkins, shares her thoughts on some of the shows she saw.

FOR most people the very thought of rabies induces fear. This is understable since this viral diseas, which causes inflammation of the brain in humans and other mammals, nearly always death.

It’s the briefest description of this year’s flagship production at the Hilton Arts Festival, Cellist With Rabies, which was staged in Grindrod Bank Theatre.

What writer and actress, Jemma Khan, and director Jaco Bouwer, both former winners of the prestigious Standard Bank Young Artist for Theatre prize at the National Arts Festival, have created, however, is something so much more layered.

The play centres on Joan Remy (Kahn), who has been jilted by her famous boyfriend (and boss), David, after she questioned his research, The Milwaukee Protocol, at a conference.

Out of spite he withdraws her funding into finding a cure for rabies and she, in her turn, is determined that neither he, nor anyone else, will be able to access any of her painstaking work.

As she begins throwing her precious research into the bin, she picks up the rabies slide – and with a feeling of pain – says she will miss the virus, but must throw it away.

Suddenly, however, rabies speaks. Portrayed by David Viviers, he proves to be seductive and, with a determination to survive built up over thousands of years, he convinces Joan that he will help her find a cure in return for being allowed to mutate.

The problem is that there is a very fine line between love and obsession and when Joan reveals her funding has been restored and that she will no longer help him change, Rabies pulls away. He cannot, however, escape Joan’s obsession and the consequences are ultimately devastating.

Together with Bouwer (The Borrow Pit and #Untitled) Kahn – whose previous work includes The Epicene Butcher, We Didn’t Come to Hell for the Croissants and In bocca al lupo – also make clever use of using microscope slides, projected film stills and even shadow puppets to bring the story to life.

From the start the dialogue is sharp and at times laugh out loud funny. But underpinning the whole is a reminder that love can sometimes be the worst form of self-destruction. A classy production delivered by some of the most talented performers in the business. 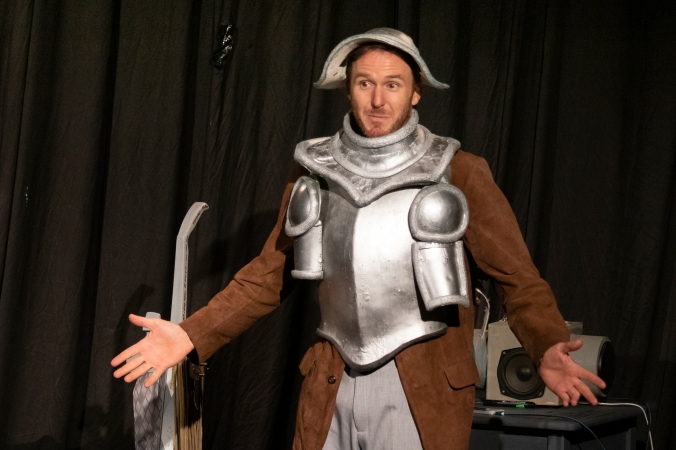 I feel I should begin this review with a disclaimer; I adore Durban writer and director Michael Taylor Broderick’s Work. Having been entranced by Jakob and then by last year’s The King of Broken Things, among my first picks for this year’s Hilton were The Forgotten Years of Donald K Pumkin and The Place of Small Miracles.

With the weather at Hilton College turning cold in rainy in the late afternoon on Saturday, it was a delight to escape into the beauty of Broderick’s storytelling.

The play begins with Bryan Hiles appearing on stage in a make-shift suit of armour, like a modern day Don Quixote. But he’s not here to tilt an any windmills, real of imaginary. Instead he wants to show you why you need to buy a Kirby vacuum cleaner.

Along the way he reveals the pain of lost love, of growing up in a family where abuse was common and support non-existent, and how we, as people, so often write people off as failures without knowing anything about them.

While sharing the benefits of the Kirby with his audience he also reveals that he wants to write a book in which he will share the secrets to how you can sell absolutely everything.

Durban-based Hiles is one of my favourite actors and in The Forgotten Years of Donald K Pumkin he proves again his special ability to make you laugh, and then minutes later to paint a picture of pain that brings tears to your eyes.

There is a line in the play when Donald says you “have to brave when you are pursuing your dreams”.

He is talking about himself, but the words can certainly apply to each and everyone of us. So, take a leaf out of Donald’s book and choose to live your life with courage, hope and a sense of humour.

I loved this play and if it is stage in Durban or in Pietermaritzburg in the weeks and months to come, I highly recommend you see it. 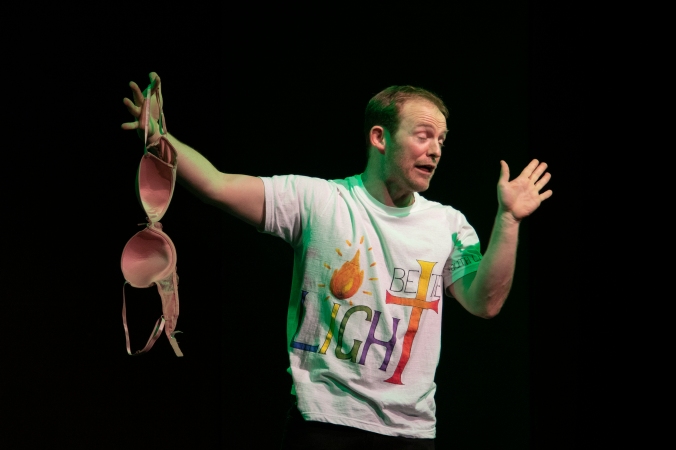 Watching Breasts –  A Play About Men, with a man, is an interesting experience. My husband laughed out loud several times during Tim Redpath’s performance of Greig Coetzee’s work, which was first presented at the National Arts Festival in Grahamstown in July 2000.

Twenty years later and with the issue of patriarchy, toxic masculinity, and gender based violence firmly in the spotlight, Coetzee’s work highlights attitudes to race, class and culture that continue to permeate South African society.

Redpath delivers a tour de force performance as he portrays several different men beginning with a former male cabaret artist, turned artist’s model, now that the years have taken their toll on his six pack.

He flirts outrageously with the middle-aged ladies in the class while at the same time trying to justify his failure to be a supportive father and his need to have sex with young women, some of whom are not much older than his daughter.

Next up is a very creepy Christian youth camp leader, who spends more time perving over the young teenage girls in his care than offering them any kind of counselling.

At the same time he tries to make himself seem less awful by judging them for not wearing the right clothing and behaving in immoral ways.

Redpath then morphs into the world’s worst best man who has turned up drunk at the wedding and gotten steadily worse as the evening has gone on. His rude and sexist jokes made me cringe and deeply thankful I wasn’t a guest at that particular wedding.

Probably the most disturbing character is Rama – named after a god, not margarine, just so you know – who grew up with a hippie, highly sexual mother, who embarrassed him as a child with her practically see-through cotton dresses.

In defiance of her wishes he buries in a churchyard rather than sending her ashes tumbling down a waterfall in the Drakensberg. He then rants and raves at her for destroying his life and making him be the adult in their relationship – and, more importantly, for him, making him hate sex.

Redpath also introduces the audience to a former HR manager who lost his job after he chose to sleep with his boss’s secretary, not knowing they were also having a relationship.

Now he stuck at home being a house husband and doing the things women should be doing, while she works. The bitter undertone here is that he feels anger and bitterness at what he sees at being discriminate for being a white man in South Africa.

My favourite character, was probably the sports fan, whose wife doesn’t understand his feelings and why he does anything. “I just want to impress her,” he tells the audiences in a pathetic voice. It’s why, he adds, men do anything.

The play ends with a schoolboy, who has suddenly realised that girls are different to boys. Unfortunately, he is learning from those older than him that they are objects to be lusted after.

It’s a pertinent end to a production, which reminds us that if we want a society where women are treated with respect, we need parents to teach them this lesson from a very young age.

With great direction from Lynn Chemaly, I really hope audiences get the chance to see this really important piece of the theatre at more spaces in our country. 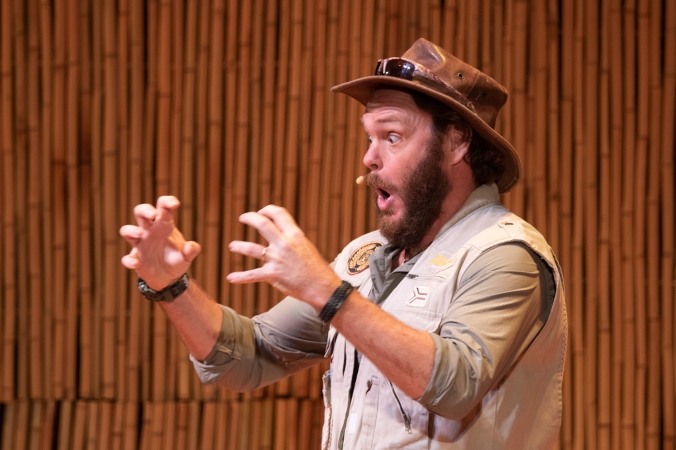 Ben Voss shares some tips on how to survive in the African bush in Benny Bushwhacker. Photo: Harry Lock

They have also created as individuals, with Voss enjoying success as his BEE alter ego, Beauty Ramapelepele, and Van de Ruit as the author of the Spud novels.

The two men have joined forces once again to create the world’s funniest conversionist, Benny Bushwhacker, whose on a mission to get people to care about the world’s green spaces and the animals that inhabit them.

Voss has done a great job researching his characters, from Benny’s best mate, Skinny, who lost his testicles to a leopard, to his gran from Cradock who raised and then lost him to the bushveld, his estranged wife Brenda has fitted him with a tracking device, the conservationist turned hunter and the drunk tourist who reckons he knows a lot more about conservation than any ranger.

My favourite was probably Riley, the teenager from Umhlanga, who was helping out at the bush camp and devastated at the lack of reception. How on earth is he supposed to take selfies and keep on social media, hey.

The pen sketches are good, but, I found myself wanting and expecting more from Voss, writer Van de Ruit, and director, Janice Honeyman.

I believe Benny Bushwhacker has the potential to be a fabulously funny show, with a strong message on the need to protect this planet we call home.

But it doesn’t feel like a finished product. Instead I walked out thinking that it needs a little more work to make theatre-goers truly appreciate the characters, especially Benny, and the message it has.