Amber Rubarth for Wildflowers in the Graveyard 2016. Photo by Anna Webber http://www.annawebber.com 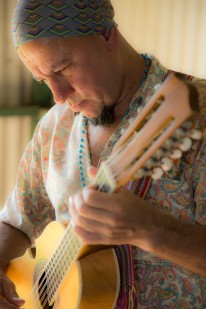 “This time around we plan to do some writing together and collaborate with a Zulu choir for some of the shows,” van der Spuy said. “Amber truly fell in love with KwaZulu-Natal, so this is really a tour of gratitude back to the big and beautiful hearts of our incredible province and beyond.”

Raised in KZN, van der Spuy immersed himself in his natural environment to create a unique sound. Drawing on influences ranging from The Beatles to traditional Zulu Maskandi guitarists, he paid his dues on the local folk scene around South Africa.

His big stage break came after he supported Crosby, Stills and Nash on their 1996 South African tour. Van der Spuy was signed to the South African world music label, Sheer, with whom he has released more than 10 albums.

His third solo release, Beautiful Feet, was acclaimed around the world where it was album of the month in four German publications and Radio France FIP pick of the week.

Rubarth, who wowed audiences in the KZN Midlands when she performed at the Caversham Mill Restaurant last year, offers music lovers a playful simplicity and insightfulness into her musings on life.

She has performed in villages across South Africa and small clubs in Japan, at Carnegie Hall, and backed up by a full chamber orchestra, as well as in hundreds of clubs and theatres throughout Europe and the United States.

Her new album, Wildflowers in the Graveyard, is a collection of songs centred around the theme of life, death and rebirth in nature and relationships.

“I am super excited to tour with Amber again,” said Van der Spuy. “She is one of my newly found favourite, singer-songwriters… and a fabulous guitar and piano player.

“On our first tour of South Africa last February, I had just fractured my wrist in a crazy fall and I was doubtful that I would even play. It miraculously all came together beautifully and eight out of our 10 shows were sold out. This time around we are focusing on KwaZulu-Natal, a place Amber truly fell in love with.

“On this outing, we are going to try different things, brand new songs and some cool collaborations.”

Sunday, October 29 sees the two musicians performing at Shapes of Africa in Mount Moreland at 2.30 pm. Tickets are R120 and lunch is available. Book at 082 432 5513 or email info@shapesofafrica.co.za

Rubarth and Van der Spuy will also be heading into Zululand to perform several concerts. The first, on November 1, is at The House, 10 Kangela Street, Eshowe. Doors open at 6.30 pm. Tickets are R100 (R80 pensioners) at 035 474 0878 or email post@thehouseinzululand.co.za

To get a taste of what to expect go to: https://www.youtube.com/watch?v=6syOCbLWqAs