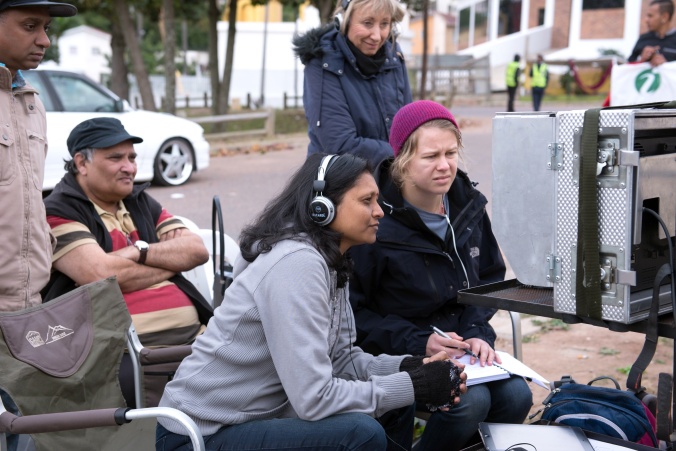 Director Jayan Moodley with script supervisor, Ashley Aldworth focus on the monitor during the filming of ‘Keeping up with the Kandasamys’ in Durban, while producers Junaid Ahmed (left) and Helena Spring ( back) look on. The film opens in SA on Friday, March 3.

The much-anticipated South African film Keeping up with the Kandasamys directed by Jayan Moodley and produced by the late Junaid Ahmed and Helena Spring premiered to an audience of almost 600 ten days ago at Gateway Ster-Kinekor in Durban. It opens nationwide in cinemas this Friday (March 3).

Keeping up with the Kandasamys was filmed on a variety of locations in Durban including the Woodhurst Hall, the beachfront, BMW Supertech in Edwin Swales Road, Chatsworth Hospice, various parks, Wilson’s Wharf and Bangladesh Market amongst others.

Set in Chatsworth, in Durban, director Jayan Moodley said in an earlier interview that she “believes that we have managed to not only capture its idiosyncrasies but also its heart and soul, that will make global audiences fall in love with it too, over a barrel full of laughs.”

After seeing it with along with a local audience at the premiere, Moodley said: “It was nail-biting watching it with the people that know the place, as I believed they would be the most critical, but as we had all hoped, the punch-lines landed and the audience laughed and clapped with enjoyment.

“I hope people all over the country come out to see it and enjoy the laughter and warmth of humanity it provides.”

“The film is a truly home-grown Durban product,” says Toni Monty, head of the Durban Film Office, the eThekwini Municipality’s film industry development unit. “It was written by Durban’s Rory Booth and Jayan Moodley and stars Durban actors Jailoshni Naidoo and Maeshni Naicker with Mishqah Parthiepha, Madhushan Sing, Rajesh Gopie and Koobeshen Naidoo and a host of local actors and extras in the cast totalling almost 500 from our city.

“And not only was the talent from Durban but 48 of the 80-strong crew including the director, writers and a producer were from Durban – that is something to make us all very proud. Big acknowledgments and thanks must go to the producers for their input in making this a proudly-Durban film.

“It is particularly poignant for us in the local film industry, as Durban-based producer, Junaid Ahmed, who, together with Helena Spring, was responsible for a number of other highly acclaimed South African films such as Happiness is a Four Letter Word, More than Just a Game, and Hard to Get, passed away in November last year during post-production of this film.

“It is a fitting “swan-song” for one of our own, who contributed hugely to the growth of the local industry through tireless efforts to nurture and encourage home-grown talent.”

“We hope that the film is a shining example of what can be achieved in Durban, by Durban-people, and we look forward to welcoming many more film-makers to take advantage of the great locations we have in the city.”

The film has been made possible through support by the Durban Film Office, the KwazuluNatal Film Commission, The National Film And Video Foundation And The Department Of Trade & Industry.