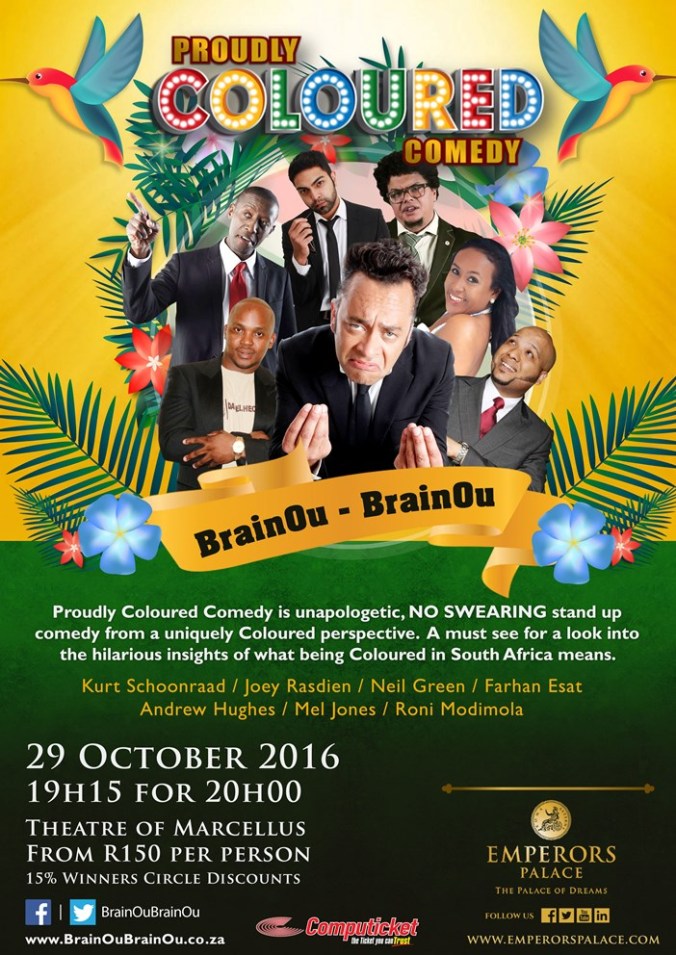 The well-known comedy series adds colour to the stage at the Theatre of Marcellus with Kurt Schoonraad, Joey Rasdien, Roni Modimola, Neil Green, Farhan Esat, Mel Jones and Andrew Hughes. A community largely plagued by stereotypes, these guys are not afraid to tell it like it is.

For one night only, they will share insights from a uniquely coloured perspective, taking diverse audiences on a hilarious journey of what it actually means to be a coloured in South Africa. And with its ‘no swearing allowed’ policy the show promises loads of family friendly fun and endless laughter.

Taking the lead as MC for the evening is Kurt Schoonraad, one of South Africa’s most recognised stand-up comedians.

Hailing from Mitchell’s Plain, which was highly influential in developing his sense of humour, Schoonraad is well-versed in all things “coloured”. The pioneer behind Cape Town Comedy Club, the comedic personality is determined to keep the comedy scene in this country alive and growing, while remaining at the forefront.

No stranger to the comedic industry, colourful personality, and headliner for the night, Joey Rasdien has earned the title of “the thinking man’s comedian”. His comedy is thought-provoking and intellectual. A delight to watch, Rasdien never disappoints.

Roni Modimola is a regular at major comedy venues across the country. Known for his dry but witty comedy style, Roni adds a slice of charm to this year’s line-up and is sure to keep the audience glued to their seats.

Comics Choice Award winner for “Newcomer of the Year 2015”, Farhan Esat, will add a burst of energy to the coloured comedy crusade. The Zimbabwean-born comic made his professional debut in 2014 and has become a regular performer on the local stage. He opened for Riaad Moosa’s Best of Riaad Moosa shows in Lenasia, and has performed at prestigious venues across the country. In October 2014, Esat was a semi-finalist in the Montreux (Swiss) International Comedy Competition.

Another Mitchell’s Plain native, Mel Jones describes herself as “the favourite” of three siblings. As one of only a handful of female comedians in the country, the award nominated comedian continues to uplift and inspire young people in coloured communities in Cape Town and similar surroundings.

From Durban, Proudly Coloured Comedy welcomes Neil Green, a rising star in the SA comedy scene. His sharp wit, commanding stage presence and honest take on life is the driving force behind his success and a good reason to see the show. The man has jokes for days…

Last but not least, fresh on the comedy scene is Andrew Hughes. When asked what his aim on comedy is, he commented that it’s not to be the best but rather to identify what makes you different from the rest and to capitalise on that…

NEED TO KNOW
October 29 at 8pm at the Theatre of Marcellus at Emperor’s Palace. Tickets range from R150 to R250 and are available from Computicket.