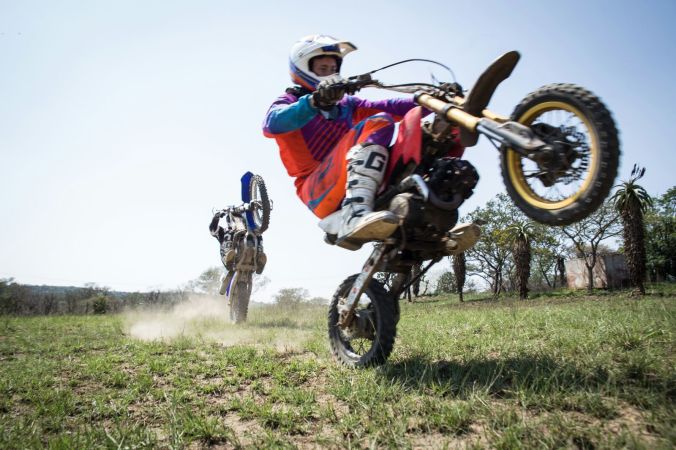 There will be plenty of motorcycle action in the main arena during the Royal Show. Photo: Supplied

LOVE the feel of adrenalin pumping in your veins? Then make sure you head down to the Royal Agricultural Show, from May 27 to June 5, at the Royal Showgrounds in Pietermaritzburg.

New to the event the Freefall Bagjump – a no strings attached freefall jump into a giant inflatable landing mattress. It’s like bungee jumping, but without the bungee cord holding you back.

Enjoy some heart-pumping fun when try out the Freefall Bagjump at the Royal Show. Photo: Supplied

Darryl Burmeister of SevenSevenSports, the organiser of the jump, explained that the three-metre deep cushion contains 11 air channels and three air chambers, as well as a safety bladder, and that the landing it offers jumpers is “very forgiving” — much softer than landing in water.

Even though jumpers will reach almost 60kph when jumping from 14 metres up, Burmeister said that there have never been any injuries in the over 300 000 jumps they’ve supervised since 2013.

“We have a 100% safety record,” he added, a fact that he attributes to the structural design of the jump and the safe work methods he employs. “We are owner run and managed, and I am a qualified safety manager with a 17-year background in Freestyle Motocross and Stunts.”

The attraction is available to everyone aged four and older and runs throughout the show’s duration.

From May 27 to 29 the main arena will be filled with the roar of off-road motorcycles. Powasol Eventing have prepared a fun filled and spectacular event over three days, during which spectators can expect to see the best of the best in Enduro and Moto-X sports sectors compete for glory.

Pro riders can expect a healthy pay day if they crowned winner in front of a 40 000 capacity crowd.

Enduro-X is one of the world’s fastest growing adrenaline sports, and legendary South African Moto-X champion, Brett Redman, will be building the track at the showgrounds out of logs, rocks, sand, pipes, pallets, tyres and more. The idea is to test rider’s stamina, skill and speed over a maximum of 12 minutes plus a lap.

Three classes will be set up: Hobby Class (weekend fun riders), Expert (more serious riders) and the PRO Class. Practice sessions and heats will take place on May 27 with more heats on May 28 and the finale on May 29.

JC and Daniel de Bruin will be wowing the Royal Show crowds with their motorcycle stunts. Photo: Supplied

Returning to the Royal Show this year are daredevil stunt riders, JC and Daniel De Bruin. Using their vast experience in Motocross, Enduro, Offroad, and Supercross disciplines, the De Bruin brothers and their friend Jean-Paul Mitchell will be attempting a stunt which has never been performed in front of a live audience before. They will be attempting to jump over three TLB construction vehicles!

In the lead up to this hair-raising attempt, the audience can look forward to some fun antics as the guys perform an array of activities, like rolling quad bikes, chariot racing, pit bike jousting, bike flips, wheelies and so much more.

Catch all the action at 12.15 pm and 2.15pm on June 4. Please note that the TLB jump attempt will only be performed during the Saturday shows.

Blood, sweat and tears are all part of the package when you want to be a Strongest Man Contender. Concrete balls, tyres and trucks are never seen the same way again, when your goal is to move these incredibly heavy objects by lifting, pulling, or pushing.

A strongman competitor shows his strength in the tire-flipping event. Photo: Supplied

Three of South Africa’s previous Strongest Man winners – Tristin O’Brien, Rory Scheepers and Thabani Mthembu – will be at the Royal Show on June 4 to demonstrate what the human body is truly capable of.

Members from the audience will also be invited onto the main arena for their own strongest man contest during the events at 3.15 pm on June 4 and 12.30 pm on June 5.

Entry to the Royal Show is R60 for adults and R40 for children under 12 and pensioners. Entry is R40 for everyone on Wednesday, June 1.