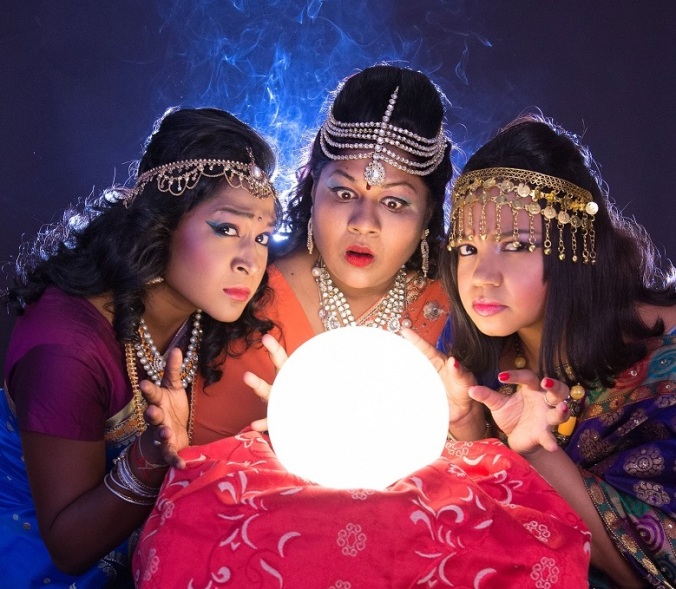 Trying to make ends meet, three sisters – Kantha, Kogie and Sushi – fumble and stumble their way through the ups and downs of the mysterious art of clairvoyance. They dig themselves in deeper and deeper with each prediction….

Laced with song and dance, Mystic Twisters, the sizzling satire from Copy Dog Productions, explores the funnier side of fortune-telling – and with the powerhouse combo of Naicker, Chinappan and Johnson, promises to have audiences rolling in the aisles.

“My choice companions on a desert island would be these three amazing actresses,” says Marius. “I’ve long been enthralled with the comic talents of Maeshni Naicker, who played the bossy kleptomaniac, Aunty, in my radio serial, Lollipop Lane, and won the hearts of thousands of fans for her starring roles in movies such as Broken Promises and The Curse of Highway Sheila.

“Sivani Chinappan (Durban Theatre Award winner for her riveting performance in A Cookie in the Kitchen) took on the lead role of Mrs Singh-Song when my comedy Lollipop Lane appeared on stage.

“Add to this mix the skills of the hysterically quirky Shona Johnson, who bagged several awards, including a Standard Bank Ovation Award, for her performance in my one-hander, B!*ch Stole My Doek, and you have all the right ingredients for a magical production.”