UNDERSTATED but gripping. That is Christopher Nolan’s Dunkirk in a nutshell, writes ESTELLE SINKINS.

Anyone wanting a gung-ho, jingoistic war movie should probably look elsewhere. This is not that kind of film.

Instead Nolan captures a single moment in the evacuation of Dunkirk – that most heroic of British military failures –from the perspective of three young soldiers, a civilian sailor and his son, and two Royal Air Force pilots.

Providing the quiet and dignified heart of the film is Mark Rylance. He plays Mr Dawson, one of the many small boat owners, who respond to a call from the Royal Navy to cross the English channel and rescue as many of the soldiers trapped on the beaches of the French town of Dunkirk.

Accompanied by his son, Peter (Tom Glynn-Carney), and a teenage boy called, George (Barry Keoghan), who jumps on board at the last minute, they head out to sea. Enroute they spot a navy vessel under attack from a German bomber. As the ship goes down, hundreds of soldiers are forced into the oil-filled waters. Dawson is determined to try and save them.

Along the way he saves a traumatised soldier (played by Cillian Murphy) and Collins (Jack Lowden), a Spitfire pilot who ditches his craft in the water.

Working together they pull as many of the terrified men, including Tommy (Fionn Whitehead), Gibson (Aneurin Barnard) and Alex (Harry Styles), into their tiny boat before heading home to England.

It’s a tiny echo of the bigger rescue, commanded by Naval Commander Bolton (Kenneth Branagh) and the British Army Colonel Winnant (James D’Arcy), which takes place at Dunkirk. Living in the United Kingdom I experienced many of the Dunkirk commemorations and seeing those little boats at anchor off the beach brought a lump to my throat.

That ‘Dunkirk spirit’ is brought to life in Rylance’s performance. His wrinkled face is full of determination and simple decency, and he adds a depth to a film where you know very little about any of the characters.

Instead of having a number of headline names occupy the screen, Nolan lets Hans Zimmer’s incredible score play a central role.

The music, alongside some of the most incredible aerial battle scenes ever devised for the screen, leaves you in the middle of the action. You literally feel like you are flying with Lowden and Tom Hardy, who plays another RAF man.

The music also gives an emotional context to the film. It evokes the terror of the soldiers as bombers and fighter planes target them; and the sense of utter despair that grips the men as they realise they may never see home and the people they love ever again. 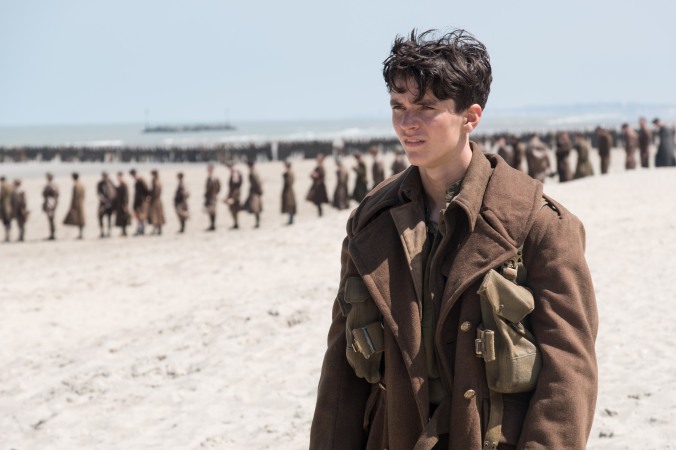 There are no heroes in this war film. Instead Nolan shows us humanity at its best and worse.

You feel horrified when the Germans attack a hospital ship filled to capacity with wounded men. And you understand the desperation, which drives Tommy and Gibson to pretend to be medics to get onto that same ship with a wounded soldier they find on the beach.

Dunkirk is gritty, real and made me feel quite emotional. The film is already having the words ‘Oscar worthy’ used in reference to it. I’m not surprised. It’s a great film and a great tribute to the British men and women who risked everything to bring their men home.