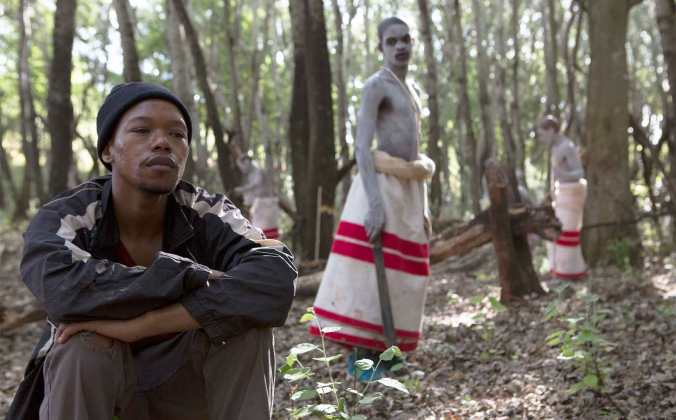 Nakhane Touré (seated) in a scene from Inexba’, which is having its South African premiere at the Durban International Film Festival. Photo: Supplied

THE South African film Inxeba (known internationally as The Wound) has won the best film award in the International New Talent Competition, at the Taipei Film Festival, ahead of its African premiere at the Durban International Film Festival at The Playhouse on Friday, July 14.

This is a latest in a string of awards for the film, which explores tradition and masculinity, and the clash between age-old rituals and modernity.

Described by Variety magazine as ‘a milestone in South African cinema’, the film stars musician and novelist Nakhane Touré as Xolani, a lonely factory worker who joins the men of his community in the mountains of the Eastern Cape to initiate a group of teenage boys into manhood.

At Cinema Jove, the Valencia International Film Festival, held in Spain from June 23 to July 1, Inxeba was awarded the Luna de Valencia for best feature film, as well as the best actor award for Touré.

And at the Sydney Film Festival, held from June 7 to 18, it won the audience award for best feature, with ScreenDaily describing it as ‘a measured consideration of class, race, self-loathing and self-assertion’.

Other awards include: the First Feature Award at the 41st Frameline, San Francisco’s international film festival; the best feature film at the 32nd Lovers Film Festival, an LGBTQI festival held in Turin, Italy; the jury prize for best narrative at the 19th annual Sarasota Film Festival in Florida, in the United States; and a special mention award at the MOOOV International Film held in March 2017.

Inxeba, which premiered at this year’s Sundance Film Festival and later opened Berlinale Panorama, was a 2014 Durban FilmMart project.

This initial pitch enabled the team behind it to obtain funding from a number of international financiers, resulting in a co-production between South Africa, France, Germany and The Netherlands.

It is the first feature from writer-director John Trengove, and is co-written by Trengove, Thando Mgqolozana and Malusi Bengu.

The Xhosa initiation ritual which forms the landscape of the film is also the subject of Inxeba co-writer Mgqolozana’s novel, A Man Who Is Not a Man.

The film, which has been sold to 19 countries for theatrical release thus far, is a strong contender to represent the country in the foreign language film nominations for the 2018 Oscars.

For more information about the Durban International Film festival go to www.durbanfilmfest.co.za