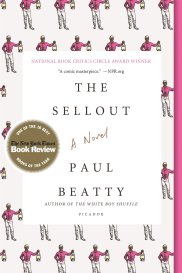 PAUL Beatty has become the first American to win the prestigious Man Booker Prize for Fiction.

His book, The Sellout, is published by small independent publisher Oneworld, who had their first win in 2015 with Marlon James’ A Brief History of Seven Killings.

Beatty, 54, who was born in Los Angeles and lives in New York, beat off stiff competition from Britons, Deborah Levy – Hot Milk (Hamish Hamilton) and Graeme Macrae Burnet – His Bloody Project (Contraband), fellow American Ottessa Moshfegh – Eileen (Jonathan Cape) and British-Canadian, David Szalay – All That Man Is (Jonathan Cape) and Canadian, Madeleine Thien – Do Not Say We Have Nothing (Granta Books).

He received his prizes, a trophy from the Duchess of Cornwall and a £50,000 cheque from Luke Ellis, chief executive of sponsors, the Man Group at a black-tie dinner at London’s Guildhall on Tuesday, October 25.

Guests at the event, which was broadcast live on the BBC News channel, included the shortlisted authors, AS Byatt, Ben Okri, Karen Bradley, John Hurt and Fiona Shaw.

The Sellout is a searing satire on race relations in contemporary America; and was described by The New York Times as a ‘metaphorical multicultural pot almost too hot to touch’, whilst theWall Street Journal called it a ‘Swiftian satire of the highest order. Like someone shouting fire in a crowded theatre, Mr. Beatty has whispered “Racism” in a post-racial world.’

The book is narrated by African-American ‘Bonbon’, a resident of the run-down town of Dickens in Los Angeles county, which has been removed from the map to save California from embarrassment.

Bonbon is being tried in the Supreme Court for attempting to reinstitute slavery and segregation in the local high school as means of bringing about civic order. What follows is a retrospective of this whirlwind scheme, populated by cartoonish characters who serve to parody racial stereotypes.

The framework of institutional racism and the unjust shooting of Bonbon’s father at the hands of police are particularly topical.

Amanda Foreman, chairperson of the judges, said of the book: “The Sellout is a novel for our times. A tirelessly inventive modern satire, its humour disguises a radical seriousness. Paul Beatty slays sacred cows with abandon and takes aim at racial and political taboos with wit, verve and a snarl.”

Though Beatty cites satirists Joseph Heller and Kurt Vonnegut as formative influences, he told The Paris Review that he was ‘surprised that everybody keeps calling this a comic novel… I’m not sure how I define it.’

Foreman was joined on the 2016 panel of judges by Jon Day, Abdulrazak Gurnah, David Harsent and Olivia Williams. The judges considered 155 books for this year’s prize, including a total of 11 call-ins.

In addition to his £50,000 prize and trophy, Beatty also received a designer bound edition of his book and a further £2,500 for being shortlisted; and he can expect international recognition, as well as a dramatic increase in book sales. Last year’s winning novel, A Brief History of Seven Killings, has gone on to sell over 360,000 copies in the United Kingdom and Commonwealth, as well as 120,000 in the United States.

Other winners of the Man Booker include: Hilary Mantel (2012 and 2009), whose Wolf Hall and Bring Up the Bodies have led to award-winning adaptations on stage and screen; Julian Barnes (2011), whose The Sense of an Ending will soon be adapted for film; Schindler’s Ark (directed by Steven Spielberg as Schindler’s List), The Remains of the Day and The English Patient.

Beatty will take part in will take part in his first public event as winner at a New Statesman-partnered event at Foyles on Friday, October 28; and Britain’s Royal Mail is issuing a congratulatory postmark featuring his name, which will be applied to millions of items of stamped mail nationwide until Saturday, October 29. It will say ‘Congratulations to Paul Beatty, winner of the 2016 Man Booker Prize’.

This is the third year that the Man Booker Prize has been open to writers of any nationality, writing originally in English and published in the UK. Previously, the prize was open only to authors from the UK and Commonwealth, Republic of Ireland and Zimbabwe.

First awarded in 1969, it is recognised as the leading award for high quality literary fiction written in English.