For theatre-lovers, well-known playwright Mahesh Dattani’s Dance like a Man will be presented at The Fringe at Joburg Theatre on Sunday, September 4 at 7pm, for one performance only.

The Shared History Festival is celebrating its milestone 10th year of the Indian Experience in South Africa from August 30 to September 10. The festival continues the centuries-old narrative of historical and cultural ties between South Africa and India.

Presented by Teamwork Arts, in collaboration with the High Commission of India in South Africa, the Shared History festival, begun in 2007, has encompassed the cultural arena with its kaleidoscope of visual and performing arts events including music, dance, theatre, comedy, wellness, food from India and collaborations with local South African artistes.

This year’s event will feature Pandit Ajoy Chakrabarty, a doyen of Hindustani classical music and a composer, lyricist and vocalist par excellence. He will be appearing in a grand Classical Indian show which will be presented as the festival’s finale.

First up on the music programme is Sonam Kalra and the Sufi Gospel Project who will have two performances on Wednesday, August 31 and Thursday, September 1 at 7pm at The Fringe at Joburg Theatre.

The Sufi Gospel Project, Kalra’s brainchild, blends the many voices of faith, through poetry, prayer and music to create one universal voice of faith; traditional western gospel melds with Indian classical sounds and Indian spiritual texts are enriched by elements of western poetry to create a sound that touches every soul.

The multiple award-winning singer and composer is that rare musician who has been trained in both Indian and Western music traditions and is equally adept at both.

She has been recognised and appreciated for her all-inclusive definition of Sufism and her message of peace and oneness has made her a popular voice at prestigious festivals and venues around the world. “My hope is that through the music of the Sufi Gospel Project I can spread the message of equality and help build bridges of peace,” she says.

On Friday, September 2 at 7pm at The Fringe at Joburg Theatre, get ready to be mesmerised by Confluence – a Musical where diverse music from Africa to Europe to India will be presented in a fusion format. Created by the group AAFRIND, a South African fusion band that plays melodies of Indo-western fusion, Confluence is a coalition between Indian and African artistes.

Indian cuisine reflects an 8 000-year-old history of various groups and cultures interacting with the subcontinent, leading to diversity of flavours and regional cuisines found in modern-day India. At this year’s Food Festival, curated by The Classic India Restaurant in Boksburg, Awadhi cuisine will be celebrated from September 3 to 8.

Awadhi cuisine, native to the city of Lucknow, capital of the state of Uttar Pradesh in Northern India, uses cooking patterns similar to those of Central Asia, the Middle East and Northern India and comprises vegetarian and non-vegetarian dishes.

The Awadh region has been greatly influenced by Mughal cooking techniques and is known for its Nawabi (Royal) styles.

For theatre-lovers, well-known playwright Mahesh Dattani’s Dance like a Man will be presented at The Fringe at Joburg Theatre on Sunday, September 4 at 7pm, for one performance only.

The story of Jairaj and Ratna, two Bharatnatyam dancers past their prime, is contrasted with that of their daughter Lata, who is on the brink of establishing herself as a brilliant dancer. Her imminent success creates tension and jealousy and the audience is drawn into the dark secrets of family relationships and conflicts between generations.

The play probes beneath the surface of the characters to question their deeper motivations, in a comic rather than tragic mode and even though the concerns are serious, you are never sure whether to laugh or cry.

It is produced and directed by Lillete Dubey, artistic director of the Primetime Theatre Company. 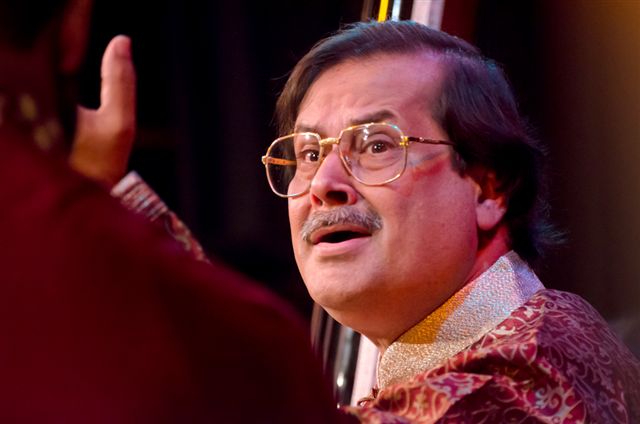 The celebratory 10th anniversary Shared History festival culminates in a grand finale with the music of Pandit Ajoy Chakrabarty on Friday, September 9 presented in the Mandela Theatre at Joburg Theatre at 7pm.

The celebratory 10th anniversary Shared History festival culminates in a grand finale with the music of Pandit Ajoy Chakrabarty on Friday, September 9 presented in the Mandela Theatre at Joburg Theatre at 7pm.

Chakrabarty, an Indian Hindustani classical vocalist, composer, lyricist and Guru, has performed in innumerable concerts and is perhaps the busiest classical vocalist of his generation today and has reached an almost cult figure status among legendary Indian classical musicians.

He regularly participates in major prestigious music conferences and festivals all over India and abroad; he has performed in some of the most prestigious venues around the world; he is the first Indian classical vocalist to be invited by Pakistan, China and by the BBC for their Golden Jubilee Celebration of India’s Independence.

He has more than 100 albums (featuring pure classical and light classical numbers including thumris, dadras, bhajans and other types of devotional songs), and numerous recordings of Shyamasangeet, Rabindra Sangeet, Nazrulgeeti, Raagpradhan and even Bengali Modern Songs, to his credit.

Shared History – the Indian Experience in South Africa – is a festival that perfectly blends with the festivity and spirit of the rainbow country and its uniqueness lies in the success it has enjoyed in highlighting the shared bonds between the two countries through the performing arts.