A MULTI-MEDIA art installation, which wowed critics and festival-goers at the National Arts Festival in Grahamstown, will be staged at the Hilton Arts Festival next month, writes THELUVVIE.COM’s Estelle Sinkins.

Bird/Fish, which was originally staged at the Tatham Art Gallery in Pietermaritzburg, features the visual art of ‘Maritzburg artist, Kristin Ng-Yang, music and dance pieces choreographed by Tegan Peacock and Bonwa Mbontsi of the ReRouted Dance Theatre.

This fusion of Chinese and South African art, which includes a giant installation, was inspired by a Chinese song lamenting the thwarted love of a bird and a fish.

The installation, also titled Bird/Fish, is made up of 148 fish, which have been painted onto plexiglass, and then suspended from a six metre wide and three and a half metre high metal structure. The idea, says Ng-Yang, is to create the illusion of a bird.

“I wanted to stretch my creativity,” she added, “and to use my traditional fish in new ways.” 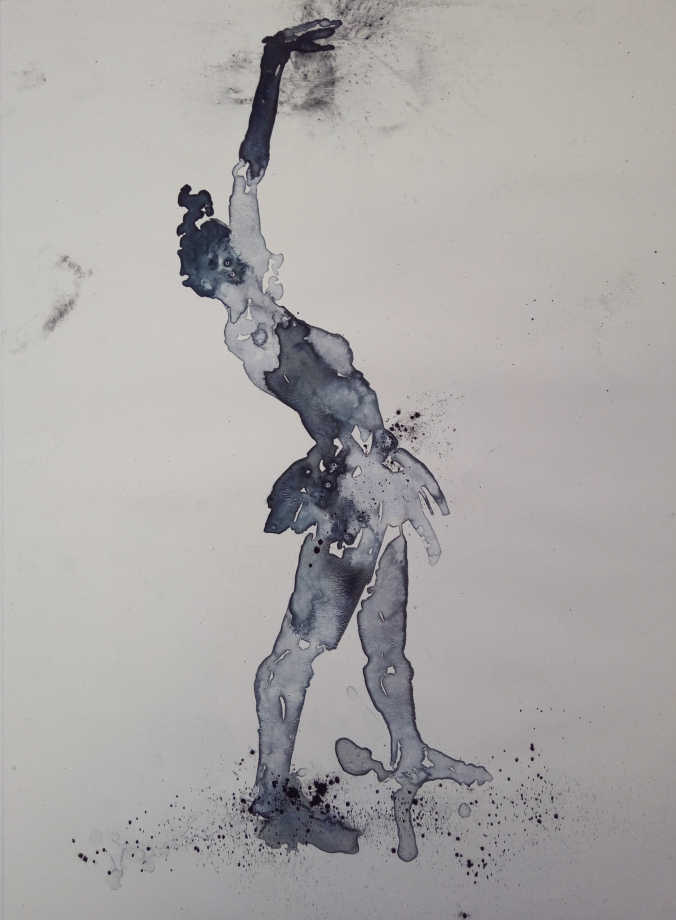 A print by Kristin Ng-Yang.

Initially Ng-Yang tried making fish from ceramics and glass but these substances proved both fragile and expensive. She then began experimenting with cutting fish out of plexiglass. The results were both exciting and challenging.

“The installation is intended to be meditative … a reflection of life’s journey into inevitable oblivion,” Ng-Yang explains. “It also alludes to the way in which one is confronted with choice, while also being subject to fate and obliged to accept or resist in the process of learning about self and other.

“In part the work is autobiographical in that it refers to my own predicament as an artist, mother, part African and part Chinese. My identity is tempered as different philosophical, cultural and gendered dimensions both challenge and mould me.”

To create their part of the multi-media piece, which includes music from Jianjun Wang, from Beijing, Mbontsi and Peacock drew on both Oriental and African rhythms.

“We did both a conceptual piece which dealt with issues of gender, race and feelings of otherness, and a more abstract work for Kristin, which aims to show that despite living in different realities the bird and the fish are in love and that they can meet in a space beyond reality,” said Peacock.

Both she and Mbontsi found the abstract piece challenging, especially since they have made a point of making contemporary dance more accessible to people. “I struggle with doing abstract work and I think that if people are unfamiliar with art then they are left with no access into it,” admits Mbontsi.

That said both dancers have enjoyed the experience of working with Ng-Yang, who is doing a practice-led PhD at the Centre for Visual Art at the University of KwaZulu-Natal in Pietermaritzburg.

The Chinese artist, who was both delighted and shocked by the success of the work at the NAF, said her installation had been accompanied by seven photographs and 12 watercolour prints.

Staging Bird/Fish, which won a coveted Standard Bank Ovation Award, was not, however, without its difficulties. The venue – the Commemoration Church Hall in Grahamstown – was a long, thin space which meant that the ‘Maritzburg team had to rearrange the installation. It was also a space that was slightly off the beaten track, which meant people had to go out of their way to see it.

“It was a hectic week. We only finished setting up at 9 am, just before our first performance at 10 am. It really was one of those sink or swim moments. I think that’s why we were so thrilled to get the award,” said Peacock.

“It was miraculous,” added Mbontsi, “and we really got a lot of support. Juliette [Leeb-Du Toit, from UKZN] did a phenomenal job supporting us in every way, even rallying people in the street to come and see us.”

A print by Kristin Ng-Yang.

Ng-Yang said going to Grahamstown had really opened the window on the possibility of doing other collaborations, especially with theatre practitioners. “It has made me more aware that I can do more things than just straight visual art,’ she added.

She is now looking forward to sharing her work with visitors to the Hilton Arts Festival in September, and to staging an exhibition at the Durban Art Gallery in November and another in Shanghai, China, in January or February next year.

“It will be interesting to take the work back to China, to the place where I first had the idea,” Ng-Yang said.