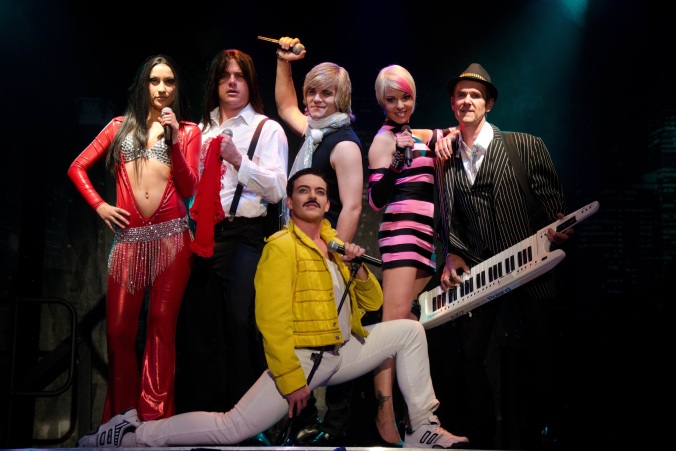 The Barnyard Theatre at Gateway presents a tribute to surpass all tributes, as they celebrate the music of the six greatest pop and rock icons of all time in Six Of The Best from July 12 to August 28.

Picture a concert featuring Freddie Mercury, Jon Bon Jovi, Meatloaf, Billy Joel, Pink and Cher all on one stage, in one show, singing their number one hits from the last four decades.

The Barnyard has become synonymous with their send-offs, and the show features a ten-piece cast who make their way through a repertoire that was made in rock ‘n roll heaven.

Just imagine Meatloaf challenging the vocal ability of Freddie, who in turn has to compete with Bon Jovi. Then there is the power and beauty of Pink, the soulfulness of Billy, and of course let’s not forget the flamboyance and decadence of Cher! Six Of The Best is about the showmanship, the charisma and the music of these performers that all comes together in one big concert that will blow your mind!

And, you can expect to hear your favourites from these six artists… think of Freddie Mercury’s anthems Bohemian Rhapsody, A Kind Of Magic and We Are The Champions; Bon Jovi’s rock numbers You Give Love A Bad Name, Bed Of Roses and Bad Medicine; Meatloaf’s larger-than-life I’d Do Anything For Love and It’s All Coming Back To Me Now; Billy Joel’s piano ballads Piano Man, New York State Of Mind and Honesty; Cher’s women-power hits Believe and Strong Enough; and Pink’s party tracks Just Like A Pill and Raise Your Glass.

The Barnyard Theatre has brought together some of their finest performers to impersonate these music icons who are played by Ruan Geldenhuys as Freddie Mercury, Tian Rautenbach as Meatloaf, James Dobson as Billy Joel, Ray Oberholzer as Jon Bon Jovi, Yvette Barnard as Pink and Chrystal Worship as Cher.

They are back up by Jared Gunston and Barry Thomson on guitar, Romeo Moalusi on bass guitar, and Brian Fraser on drums.

Tickets are R155 per person from Wednesday to Saturday, with discounted specials of R120 per person every Tuesday night and R110 per person for the Sunday matinee show.  For bookings and enquiries, phone The Barnyard Theatre on 031 566 3045 or visit http://www.barnyard.durban.