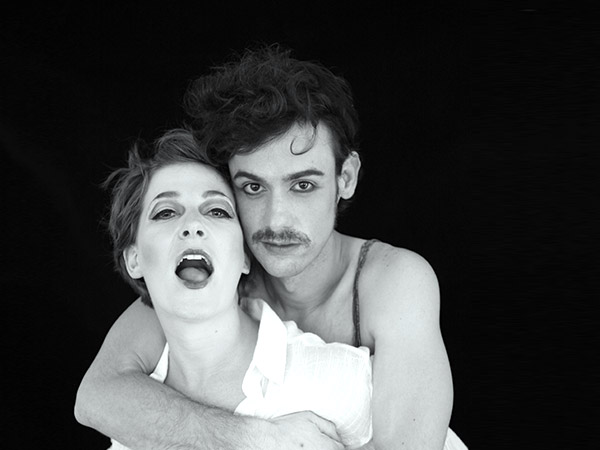 We Didn’t Come To Hell For The Croissants stars Jemma Kahn and Roberto Pombo.

Led this year by Tara Notcutt and Philip Rademeyer, Cape Town Edge is the original pioneer of collective venues at the National Arts Festival. For a trailblazing 10th year, they present work from top Cape Town companies.

“2016 marks my 6th year of running Cape Town Edge, and I cannot be prouder that our awesome collective is celebrating its 10th year at the National Lottery Fringe,” says Notcutt.

“We have a record 10 shows on offer – one for each year that Cape Town Edge has been leading the way on the Fringe,” says Rademeyer. “And our little trick up our sleeve this year is inviting the devilishly sexy We Didn’t Come To Hell For The Croissants to be our special late night guests from Joburg. We are excited that they are going to be our 11th show, signalling the expanding future of The Edge.”

Every day at 10am is Sillage, the story of a mother and daughter forced to pack up their family home and fit themselves into the very boxes they’ve fought against their entire lives. The show is written and directed by Penelope Youngleson (Silver Standard Bank Ovation Award winning shows A Man and a Dog and Siembamba; writer of Standard Bank Ovation Award winning Expectant; Fleur du Cap nominee 2016; Fleur du Cap winner 2014).

At 11.30am daily Youngleson also directs A Man and a Dog, which uses song, folk tales, and physical theatre to tell the story of a Zulu boy looking back on lost innocence. It is performed by Nhlanhla Mhkwanazi, who was nominated for the Fleur du Cap best performance in a one hander and Broadway World South Africa’s best lead actor in a play.

From July 5 to 10 at 1pm audiences can catch a laugh-out-loud pop-comedy for the YouTube generation: You Suck and Other Inescapable Truths. In this part ‘dear diary’ and part sarcastic teen commentary, Klara van Wyk (of The Epicene Butcher) engages with growing up in all its complexity.

At 2.30pm daily, audiences can enjoy a reinterpretation of Ibsen’s Ghosts, The Graveyard, a play about memory, addiction, and family. A man returns to the basement of his childhood home and finds a graveyard of forgotten objects. Presented by Rust Co-Operative, the play is written and directed by Philip Rademeyer (writer-director of Standard Bank Ovation winning Ashes and internationally award-winning The View).

At 4pm daily is the internationally renowned sleight-of-hand artist Stuart Lightbody with his new show, Sleepless Dreams, fresh from a sold out run at Prague Fringe. From the Standard Bank Ovation Award winning creators of Illusive and Devilish comes a true story of obsession – a story that starts with an out-of-print book hidden in a secret library.

The 5.30pm slot is also shared, with Ebola from June 30 to July 4. Through visual and physical theatre, Ebola is the story of a European doctor working at a clinic in Sierra Leonne. Award-winning actress Hilda Cronje, Cameron Robertson and Andi Colombo weave a tale of love and loss exploring our own humanity. Directed by Nicholas Ellenbogen.

From July 5 to 9 at 5.30pm, Theatre Arts Admin Collective and Young in Prison’s post release programme presents Ubuze Bam, a raw, visceral and deeply honest play. Under the direction of award-winning Thando Doni, four young men make their theatre debut. Ubuze Bam quite literally means ‘my nakedness’; a journey of healing and self-discovery for the four new actors. A must-see production – vulnerable and exposed, these men are on a journey, on the other side of the glass looking in. Or out.

The return hit for 2016 is the Standard Bank Ovation Award and PANSA New Writer Award-winning drama, Salt. A schizophrenic woman encounters a new doctor intent on dragging her out of her drug-induced amnesia. After selling out at NAF and in Cape Town, Salt is back one last time! The team has garnered many awards and nominations: Emma Kotze – 2014 Fleur De Cap Most Promising Student Nominee), David Viviers – Winner of the Brett Goldin Bursary, KKNK 2016 Best Upcoming Actor Nominee, 2015 Fleur du Cap Most Promising Student Nominee, Shaun Gabriel Smith – Suideroosterfees 2016 Distell Jong Ster Nominee.

At 8.30pm night falls and the entertainment becomes sultry with Private Parts. From the sexy and scary to the strange and psychotic, this contemporary musical theatre revue invites you into the depths where untold stories live, thoughts are repressed and secrets are never whispered – the private parts. Featuring new musical theatre pieces by award winning composers, Private Parts is a part of a new wave of musical theatre Mixing Bowl Productions has introduced in their sold-out concert series No Jazz Hands Allowed.

And lastly at 10pm for for nights only is We Didn’t Come to Hell for the Croissants! This sexy little show is unmissable and definitely not for children – unless you are a truly awful parent. Jemma Kahn and her irreverent side-kick Roberto Pombo return in the follow up to the international cult hit The Epicene Butcher. Seven Deadly Sins. Seven stories from Tertius Kapp, Rosa Lyster, Lebogang Mogashoa, Nicholas Spagnoletti, Louis Viljoen, and Justin Oswald.

Bookings can be made at http://www.nationalartsfestival.co.za/