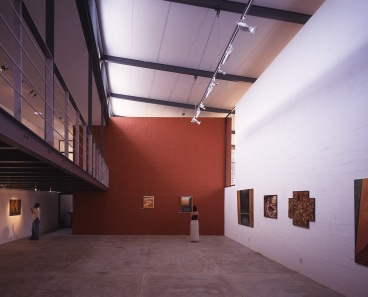 The KwaZulu-Natal Society of Arts was founded 110 years ago and has resided at its current address in Bulwer Road, Glenwood, since 1996. On May 12, 1996 Ben Ngubane, the first democratically elected Minister of Arts and Culture, opened the building and the KZNSA plans to celebrate the 20-year anniversary of this occasion.

The gallery will be hosting a four-week exhibition, starting on Tuesday, May 24 at 6pm with a special anniversary party and exhibition opening. The exhibition closed on June 19.

Visitors will be able to view the work of Michál Cohen and Cindy Walters in the Mezzanine Gallery. In 1994 an international competition was held to select a design for a gallery for the KwaZulu-Natal Society of Arts.

Michál and Cindy, who had just graduated as architects from the University of KwaZulu-Natal, submitted the winning design, and have gone on to establish a prestigious architectural practice in London, Walters and Cohen.

The brief was for a community art gallery that would encourage and promote young artists and create a vibrant and stimulating environment in which to exhibit work from around South Africa. The project called for collaboration with local artists who made up the client body. The success of the project depended on a building that achieved maximum flexibility within a very limited budget and a detailed understanding of the local climate.

Twenty years later the building remains contemporary, robust, flexible and aesthetically pleasing, and goes a long way to represent the identity of the organisation and its drive towards a dynamic and transformed future.

For the anniversary the KZNSA are exhibiting original design drawings and sketches by the architects, an audio-visual celebrating the key contributors to the building project and video footage from the 1996 opening event.

Keeping with the theme of architectural work, urban design and local pride, the Main Gallery hosts the work to=date on the eThekwini Local Area Plan, a project of eThekwini Economic Development and Strategic Planning.

The purpose of this Local Area Plan (LAP) is to create a vision and framework to direct the regeneration of the Inner City of eThekwini. The LAP will provide the primary spatial vision for the Inner City area and become a co-ordinating and integrating tool that directs municipal department activities and expenditure and provides the private sector with direction and confidence in the future growth of the area.

The LAP describes, in writing, pictures and drawings, the potential future of the Inner City, giving reasonable certainty and predictability for potential investors, developers, business owners and landowners, and attracting future residents and tourists. Whilst the purposes of the Plan are many, it primarily gives a clear direction for positive change, indicating what is appropriate and necessary to revitalise the City.

As part of this exhibition, the KZNSA has commissioned 10 emerging artists, architecture students, street artists and architects to create drawings and visual art in response to the LAP.

In the Park Gallery the KZNSA will be paying tribute to artist, Andrew Verster. In 1996 the opening exhibition at the Glenwood KZNSA featured a body of work by Andrew, one of Durban’s most beloved artists. For the anniversary exhibition the KZNSA have gathered his pieces from the Tamasa Gallery and other private collections to create a moving tribute.

Other attractions will include the DUT Anniversary Logo Design Project. A collaboration with the Durban University of Technology Faculty of Arts & Design resulted in third year graphic design students being tasked, as part of the academic programme for the year, to develop and produce an anniversary logo and campaign for the KZNSA.

A selection of the best work was presented to the gallery and designs by Karl Ludick and Rebecca Buxton were chosen. The students were then commissioned to resolve their designs into finished products for the anniversary campaign.

The KZNSA has a long history of striking mural art on its Bulwer Road frontage for the public to enjoy as they drive and walk by. Durban graffiti artist,‘Ewok’ (Iain Robinson), painted the very first mural 20 years ago and is returning to create a piece for our anniversary; work has begun and will include the new anniversary logo.

Walkabouts, panel discussions and presentations will also be held as part of the education programmes for each show – programme to be confirmed.

The KZNSA Gallery is open from Tuesday to Friday from 9 am to 5 pm, Sundays from 9 am to 4 pm and Sundays and public holidays from 10 am to 3 pm.