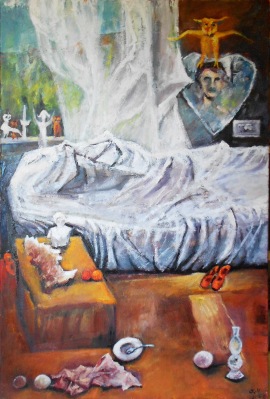 ARTIST, Jannie van Heerden, is showcasing his work at artSPACE Durban in the exhibition, Helen Martins and the Owl House – a personal view.

Asked why he had chosen his subject, he said: “The reason that I chose the Owl House is because I met Helen Martins in Nieu-Bethesda and was very impressed by her liveliness and total dedication to the creation of her wonder world.

“She originally trained as a teacher at the Graaf Reinet College and after a short marriage settled with her parents in Nieu-Bethesda. After the death of her parents she commenced on creating the sculpture garden with the assistance of Koos Malgas.

“Her inspiration was the Bible and Omar Khayam, but she was also obsessed by owls and the Mona Lisa, which she depicted in many different ways.

“The interior of the house has walls and ceilings covered in powdered glass which gleams in low light and with the beveled mirrors on the walls creates a mysterious atmosphere, She also placed sculptures inside the house, e.g. lying figures as doorstops and mermaids on the edge of the bath.

“Helen became more and more isolated from the conservative Afrikaner community of the town who considered her eccentric behaviour with suspicion. To compensate for their hostility they would send her gifts of canned fruit and jam, which she never ate but used as decorations in the kitchen shelves.

“Her eyesight started failing by 1978 and she committed suicide in the front room where she hung a black golliwog upside down on a crossed shaped mirror and drank caustic soda.

“My paintings do not attempt to depict the museum as it is today, but rather the house as it was when I met her, and also a year after her death when I obtained the keys to the locked up house, and the plants in pots inside had grown huge and fallen over onto the beds. I have also used a lot of artistic freedom and rearranged objects in the paintings. I am attempting to depict the spirit of Helen Martins.”