A model shows off one of the new scarves. Photo: Ardmore/Hermès

LUXURY French brand, Hermès, and Ardmore Ceramic Art, based in Caversham in the KwaZulu-Natal Midlands, have collaborated to launch a new range of patterned scarves.

The first steps in the partnership were taken in 2013 when Ardmore founder, Fee Halsted, and her daughter, Megan Berning, were approached by Hermès designers at a ceramic fair in Paris. They met with the Paris-based firm and three years later there are African-inspired designs on the company’s products.

Flocks of brightly coloured birds and the abundant wildlife found around the Zambezi River has inspired the first two patterned silk scarves, which come in a range of gloriously bright and rich colours.

They have been designed by Ardmore’s artists, including Sydney Nyabeze, under the guidance of Halsted’s eldest daughter, Catherine Berning, in collaboration with the French company’s own designers. 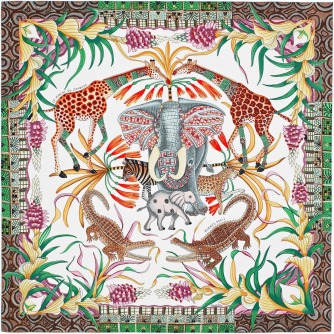 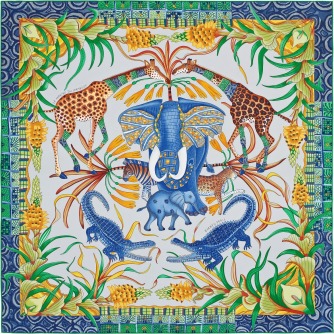 The “La March du Zambèze” scarf (pictured) features a central elephant surrounded by other creatures and indigenous flora motifs, while “Savanna Dance” shows a vervet monkey being chased by a leopard, giant King Protea Flowers and symbols of Zulu culture.

Hermès have also taken the orange and pink version of “La March du Zambèze”, which features decorative elephant and crocodiles, and created a very chic handbag.

It is the first time Hermès have worked with a South African designer and for Halsted – who, as a young artist, owned a treasured Hermès scarf which brightened her student digs – it is a dream come true.

“I am so proud that an International design company like Hermès chose Ardmore Ceramic art as a source of inspiration for their 2016 scarf launch,” she said. “It thrills me to see family, friends and strangers wearing our colourful designs. It is as if they want to belong and be very much part of the Ardmore story.

“Whenever we go into a Hermès store in Miami, London, Bangkok or Dubai, it is our artists’ designs that hang in pride of place and the shop assistants all beam with delight when I tell them we are the designers. They enjoy telling us that the scarf has sold out and is very popular with customers!”

Similarly Ardmore has expanded from its ceramic beginnings in 1985. Today you can buy napkins, place mats, scatter cushions, table cloths and runners under the Halsted brand and a range of chic handbags, designed by Megan. All the products feature Ardmore’s trademark colourful designs which celebrate Africa’s animals, insects, birds and plants.