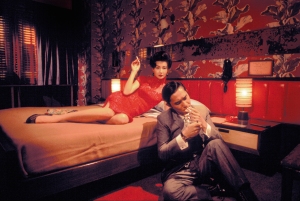 In the Mood for Love

FilmClub will be screening In the Mood for Love, directed by Wong Kar-Wai, at the Tatham Art Gallery on Tuesday, November 3 at 7 pm.

In the crowded Hong Kong of the early 1960s, Mrs Chan (Maggie Cheung) and Mr Chow (Tony Leung) rent rooms in neighbouring apartments and gradually come to realise that their spouses are having an affair.

Hurt and lonely, they turn to one another for comfort, and to try to understand their circumstances and – perhaps unsurprisingly – they fall in love. But they are determined that they will not act as their spouses have – they “will not be like them”.

A masterpiece of restrained sensuality, Wong’s intensely poignant and ravishingly beautiful film was a major contributor to the revival of film melodrama in the early 21st century.

Mr Chow and Mrs Chan may repress their emotions, but those emotions are displaced onto the external world and conveyed to the viewer through Wong’s passionately expressive camera and mise-en-scène.

In the great tradition of early melodrama, several key sequences are entirely wordless; the characters’ desolation evoked with exquisite precision by music and bodily gesture.

In the Mood for Love is a philosophical film, not just about love, but about the memory of love and the experience of time – about the fact that the past is irrevocably past and yet always with us. But it is also, in the words of one commentator, a “gorgeous, hypnotically sexy” film that gives the viewer a profoundly satisfying aesthetic and emotional experience.

Entry is R35 per person and The Tatham Coffee shop will be offering a soup and bread supper from 6 pm onwards (at a very reasonable R30 per person). Safe parking isavailable in the government parking lot next to the gallery in Chief Albert Luthuli Street, Pietermaritzburg.