The hilarious one-woman show, B!#ch Stole My Doek, written by Clinton Marius and starring the inimitable Shona Johnson, is heading to the Cape Town Fringe fest. If you are in Cape Town I urge you to go and see this fabulous show. In case you want to know a bit more about it, check out my review. 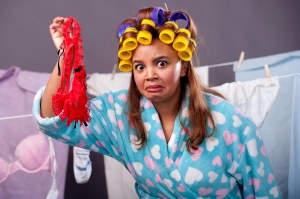 ON a stage bare except for a washing line, a few items of clothing and a washing basket, Shona Johnson effortlessly holds the attention of the audience in the one-woman show B!#ch Stole My Doek.

She plays Salome, mom to 15-year-old Laverne and 12-year-old Travis, and wife to Dennis. Salome is busy having a good old gossip with one of her neighbours. She’s filling her in on what’s been going on with the area’s newest resident, Chelsea Fynn.

Salome reveals that she is convinced Chelsea has stolen her doek, a green and polka-dotted number she treasures. Why, asks her friend? Well it’s simply because when she put her laundry out the doek was there alongside Chelsea’s very skimpy underwear, but it was gone when she went to get it later. So was the underwear.

Salome confronts Chelsea and demands her property be returned. It’s the start of a war which escalates over the space of three days, ending with a “classic coloured confrontation” involving shouting loudly, waving fingers and eventually hairpulling and scratching.

Salome also ropes in her children to spy on her neighbour, even getting Travis to steal her post. She learns that Chelsea is married, although no one has seen a husband around. It’s a catalyst which sets in motion a violent confrontation which her husband Dennis gets drawn into.

Johnson does an incredible job drawing each of the characters. Each is fully formed and not simply a caricature, which could so easily be the case. But what makes this piece work so well is Johnson herself. Her warmth and engagement with the audience is magical to watch and be a part of.

B!#ch Stole My Doek was one of my theatre picks of 2014 and I recommend you watch it. – Estelle Sinkins

B!#ch Stole My Doek is at the City Hall from September 30 to October 3 at 9.30 pm daily and on October 4 at 1 pm. Tickets can be booked at http://www.capetownfringe.co.za