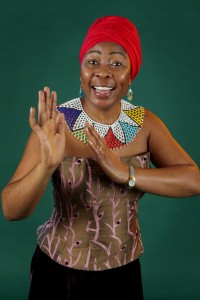 Storytelling is a deeply traditional activity in Africa and Mhlophe is one of the few internationally accomplished woman storytellers. She does her most important work through compelling performances, working to preserve storytelling as a means of keeping history alive and encouraging South African children to read.

An exhibition in the Grindrod Bank Theatre on the Hilton College campus, by Brent Dodd and Ed Schroeder, is linked to Gcina’s Memory House project, due to open in Durban soon. In March the three of them collaborated to stage a magnificent exhibition and this project has evolved from that.

Gcina will be telling stories in the lecture room alongside the Grindrod Bank Theatre. At the same time Brent will paint a portrait of her which will be auctioned later in the weekend. Funds raised will go to the Memory House.

She is showcasing the Memory House, a place where ordinary South Africans can go to tell their stories. An exhibition of the Memory House will be on display in the Grindrod Bank Theatre foyer.

Mhlophe was born in 1958 in KwaZulu-Natal to a Xhosa mother and a Zulu father. She started her working life as a domestic servant, later working as a newsreader at the Press Trust and BBC Radio, then as a writer for Learn and Teach, a magazine for newly-literate people.

Several experiences inspired Mhlophe to turn to a career as storyteller. She credits her storytelling ability to her grandmother, who brought her up in Durban.

Mhlophe says: “My grandmother taught me everything about telling stories. When I was growing up, half the kids in our neighbourhood would come and spend the evening at home so that they could listen to Izinganekwane (tales).”

She began to get a sense of the demand for stories while in Chicago in 1988. She performed at a library in a mostly-black neighbourhood, where an ever-growing audience kept inviting her back. Still, Mhlophe only began to think of storytelling as a career after meeting an Imbongi, one of the legendary poets of African folklore, and after encouragement by Mannie Manim, the then-director of the Market Theatre, Johannesburg.

The Hilton Arts Festival is in its 23rd year and takes place at Hilton College from September 17 to 20. For more information about what’s on at the festival this year please visit http://www.hiltonfestival.co.za